Honesty is the Only Policy in Bankruptcy – Runaway Thunderbird 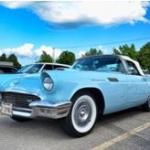 You cannot hide assets during a Bankruptcy Filing without serious ramifications.

While in a Chapter 7 bankruptcy, a debtor disclosed during a Meeting of Creditors that he owned a 1957 thunderbird and a trailer to store the car both valued at $90,000.

Shortly after, the debtor claimed that the vehicle was lost or his son with a similar name had taken the vehicle.  Subsequently, the debtor created false bills of sales in an attempt to show he had transferred the Thunderbird and the trailer to his son.   However, during a DMV search, it was found that the transfer of ownership never took place.

The bankruptcy Court ruled that the 1957 Thunderbird and trailer were assets of the Chapter 7 estate and the debtor was not authorized to transfer ownership.

This 67 year old debtor was sentenced to four months in prison for concealing assets and lying under oath.   The jury never believed the Debtor’s story about his run-away Thunderbird.     The debtor’s son now has a judgment against him for the The Thunderbird and trailer.

It is absolutely necessary to tell the truth when you file for bankruptcy.

I always remind my client’s truthfulness is absolutely necessary.    If an experienced bankruptcy attorney had pointed this out to their client (if the client disclosed the claim), this could have been avoided.

There are many implications and ramifications when you file for Bankruptcy.   You should examine the legal representation you choose and always, always be truthful.