Which is Worse? Never being rich or used to be rich? 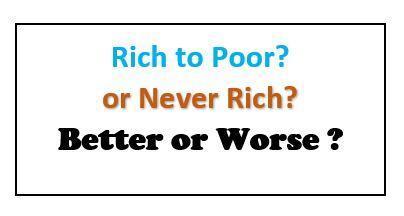 Five Famous Wealthy Families who Used to be Rich

2.     The Strohs:  Company founder Bernhard Stroh arrived in the U.S. from Germany in 1850 with $150 and a family recipe for beer.   His sons expanded the empire and by 1980, the Strohs had the country’s 3rd largest brewing company, which valued the family fortune at $700 million.  Today, 5 generations later, the company is gone, the result of an overload of debt, competition and missed opportunities.    Going from the 3rd largest down to out of existence is tough to swallow even with a beer.

3.     The Kluges:    After 9 years of marriage Patricia Kluge divorced her husband, founder of Metromedia.  Mrs. Kluge received a 200-acre estate and $1 million a year in a divorce settlement.   About 20 years later, in 2011, she was bankrupt as a result of pouring all her money into a vineyard, taking on too much debt for expansion and being a victim of the real estate crash.  Her property was foreclosed and Donald Trump brought the vineyard for 6.2 million.    $1 million a year was just not enough for Mrs. Kluge to live well….

4.     The Vanderbilts:  When Cornelius “Commodore” Vanderbilt died in 1877, he was worth $100 million.  He started his steamship and railroad empire in 1810 with $100 he borrowed from his mother.    6 generations later, the enterprises he founded are no longer in the family.   Anderson Cooper a 6th generation descendant made a statement that there’s no trust fund.   What’s left is a legacy of philanthropy, including Vanderbilt University.    The great money skills of Commodore were not passed on to his later generations.

5.     The Hartfords   Huntington Hartford, heir to the A&P grocery chain fortune, lost his millions through failed enterprises and a playboy lifestyle.  As the grandson of the found of the Great Atlantic & Pacific Tea Co., Hartford received an income of $1.5 million a year.   After declaring bankruptcy, Hartford moved to the Bahamas in 2004 where he lived until his death at age 97 in 2008.    Apparently,  $1.5 million allowance is just not enough to live for a playboy.